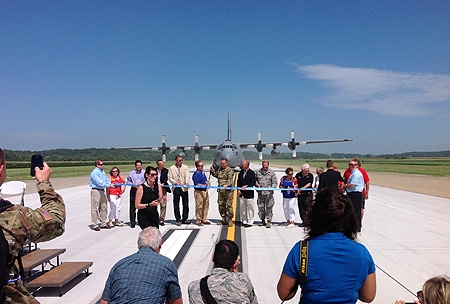 This project called for the complete removal and reconstruction of the Assault Strip Runway 13-31. The length of this runway, primarily used and funded by the military, is 4500’ long by 75’ wide. Twelve inches of fly ash treated subgrade and six inches of cement treated base were installed beneath the 13-inch thick concrete runway. With only 120 days to complete the work and strict specifications, crews did a great job of planning and keeping on schedule. The wet spring made it even more challenging, however, the accelerated project was completed prior to the deadline. 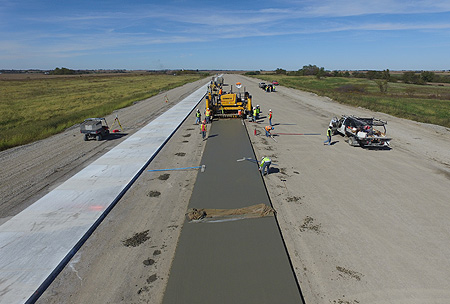 This project required the reconstruction of Runway 18-36 as well as the connector taxiway and the hammerhead turnaround. Crews began by crushing and removing the old runway. The rock was recycled and incorporated into the subbase. Beneath the base rock was 12” of fly ash treated subgrade. Next, crews paved six, 4,000 feet long passes. One challenge of this project was getting the materials to the job site. With no local materials available, all of the concrete materials came from Kansas City and Louisville, Nebraska. This award winning project was completed in the fall of 2016 with a smoothness profile index of 0.0. 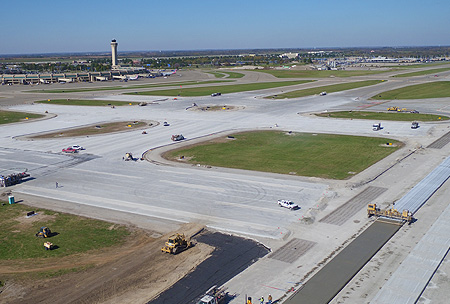 This project is the second phase of the runway rehabilitation at KCI. It consisted of complete removal of over 152K square yards of runway and reconstruction of 17 inches of PCCP on two runways and several taxiways. With the massive amount of work to be completed in 190 days, scheduling and weather were two of the biggest challenges. This award winning project was completed on-time in December 2016. 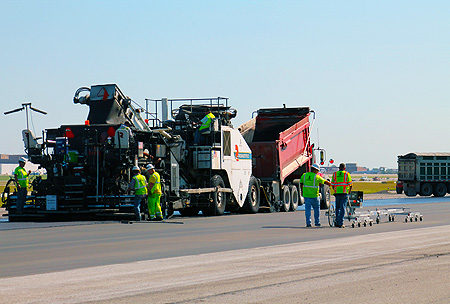 This project required the existing runway and taxi ways to be milled and replaced with four inches of asphalt. The asphalt mix was placed in two 2-inch lifts totaling 4800 feet and over 12K tons of asphalt. In order to improve the quality of the runway, Ideker followed the echelon-paving practices. Using two pavers allowed the crew to pave the next lane while the first lane was still hot, resulting in better compaction between lanes. Ideker overcame several challenges including drying the 4-inch deep milled areas after rains and getting trucks escorted in and out of the work area without having to stop the two paving operations. 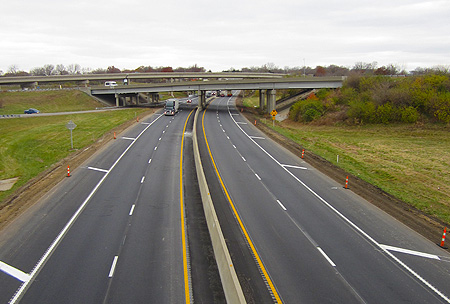 This project consisted of paving three miles between Vivion Road and Route 69 at Claycomo, Missouri. The project included paving four bridges and 64,000 tons of Superpave material that ranged from 2.5” to 12” thick of asphalt pavement.

The project began in May of 2015 but was delayed multiple times due to bridge work delays and errors in the plans. Any work requiring a reduction in lanes had to be completed at night between the hours of 8pm to 5am. The crew was faced with many challenges but managed to overcome them by working together. The project was completed one month earlier than contractually required. 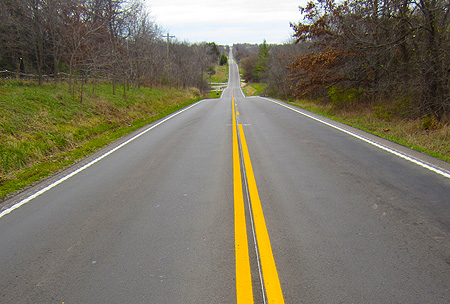 This 5.6 mile project ran from 104th Street in Liberty to Route 92. It consisted of building a two foot wide shoulder, as well as patching and overlaying the roadway. Crews were challenged with rain delays, rework, and slope stabilization due to the large amount of rain over the course of the project. They were also restricted from working during the opening and closing hours of school each day. Even with the set backs, the team was able to complete the project nearly one month ahead of schedule.